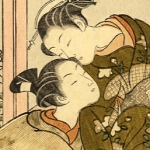 &nbspHarunobu
Warning: Use of undefined constant Profile - assumed 'Profile' (this will throw an Error in a future version of PHP) in /home/httpd/japanese-finearts.com/public_html/item/search_form2.inc on line 33

(1725-1770)
Ukiyoe painter. Also referred to as Shikojin, Choeiken, and others as Betsugo. He is considered one of Nishimura Shigenagaüfs pupils, but a theory tells he was a pupil of Nishikawa Sukenobu. He took part in an exchange session of the Japanese traditional calendar with pictures twice (in 1765 and 1766) which were in boom at the times, and in cooperation with dilettantes such as Kyosen, engravers, or printers, he opened a new frontier in the technological development of the wood-block multi color print and the color expression, which allowed him to contribute to the creation of the Nishikie (multi-color prints). While being known for the lyric beauty with the customs and manners, he left many wood-block picture books. He is also told to have made autographs.

Searched by  Artist "Harunobu"  Change of a search condition